As a follow-up post from this one I thought I would share a few of the places my work has been published since February 2016. It's been exciting to have my work featured in different places and on different mediums and I look forward to what happens in the coming months and years if this writing thing continues!

In March 2016 one of my trail camera photos won the grand prize of the annual Alberta Fish & Game Association's annual Trail Camera Photo Contest. The winning photograph and the accompanying plaque are displayed below. This was a fun contest, so I'll definitely be entering each year!

In April 2016 I had my story Critter Cams: Connect Students to Alberta's Wildlife Through Technology published in the pages of Nature Alberta magazine, which is published quarterly by Nature Alberta. My article discussed the trail camera program I started at Enviros Base Camp and the success we had with it. The article ran in the Winter 2016 (Volume 45, Number 4) issue of the magazine. 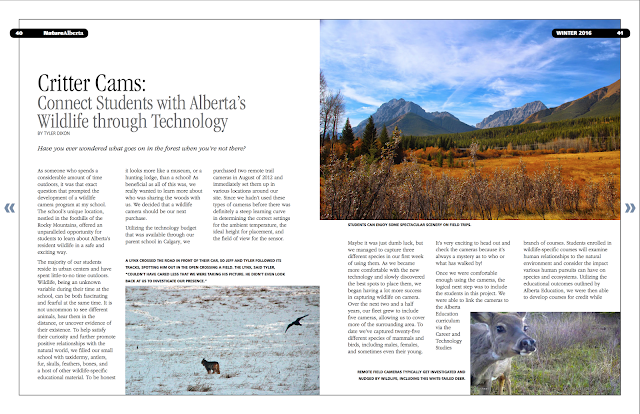 A couple of months later, in June of 2016, I was featured as Hiker of the Week in a campaign that's run by Hike By Faith. It was nice to be honoured in this way by a loyal Twitter follower.

In July 2016 I had another story published that was very similar to the one in Nature Alberta magazine. This time my article Critter Cams: Connecting Students to Alberta's Wildlife Through Technology was in the pages of Of Land & Living Skies: A Community Journal on Place, Land, and Learning, which is a collaborative journal between SaskOutdoors, the Sustainability Education Research Institute (SERI) with the University of Saskatchewan, and the Faculty of Education at the University of Regina. My story appears in the Water issue (Issue 6, Summer 2106), which can also be found online along with all their previous publications.

In the fall of 2016 I was featured as a Health Champion by Ever Active Schools on their Instagram feed. In a series of three posts they showed photographs of me outdoors and captioned them with blurbs from the brief interview we did. You can view the three posts by visiting the links below the follow screen captures.

In November 2016 I was contacted by a gentleman (Andrei Vargas) from Brazil inquiring if he could use one of my photos for his stand-up paddleboard catalog. This sounded like an interesting venture, so I agreed provided he sent me a copy of the catalog. Later that month I received the catalog and was surprised to see my photograph on the cover of Inside Wave. This marks the first time any of my work has earned a place on the cover of a publication.

In May of 2017 I was contacted by Spirits West Merchants, a full-time liquor store and part-time antique dealer from Bragg Creek, Alberta. They wanted to use one of my trail camera photos in an advertisement that was to be featured in the May/June 2017 issue of City Palate. Of course I agreed and I think the ad turned out great! You can view the full digital issue right here.

Later in May I was featured for the fourth time in More of Our Canada magazine. This time my story Rock Stars, about my amazing trek to the Burgess Shale, was given a four-page spread complete with photographs. The story appeared in the May 2017 issue and was also published online under the heading, Our Travels: Finding Fossils in the Burgess Shale. 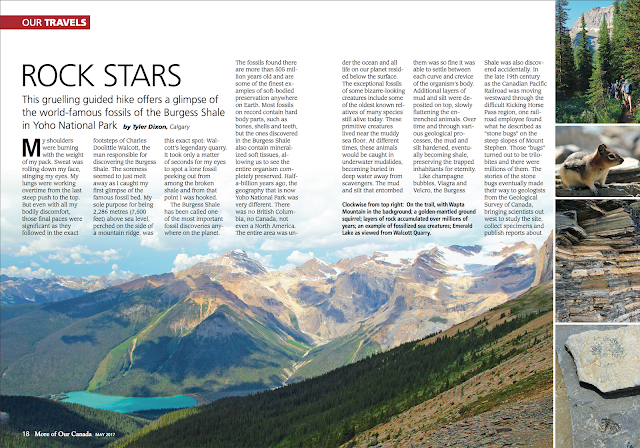 Another story about my hiking adventure to the Burgess Shale was published in Hiker's Voice, the official newsletter of the Alberta Hiking Association. My story titled Yoho's Stone Bugs appeared in the Summer 2017 issue of the newsletter and can be viewed online right here. 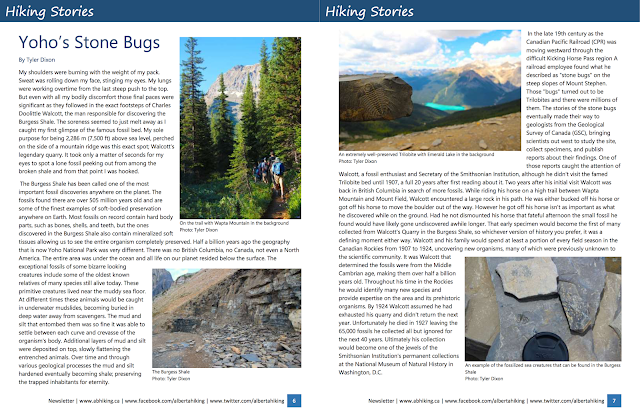 
This past summer (August 2017) I had my first ever contracted writing gig for Seekers Media. I was sent to Cypress Hills to report on the ever-growing mountain biking scene that's present there and the upcoming Battle Creek Showdown, which is a popular mountain bike race in the park. My story Mud, Sweat & Gears was featured on the ZenSeekers website and promoted heavily across all social media platforms. I really hope I can do some more work with them in the future because getting paid to do something you love is pretty awesome!

In addition to all of the above I have also been contributing stories/posts to Curiocity Calgary's website. The website is in the style of Buzzfeed (if you're familiar with them) so they do lots of posts that are in the form of lists such as "Top 10 Spots For..." or "The Best Places To...". As usual my stories all have an outdoor focus and I hope to contribute more to them in the coming months. To view all of my past work please visit my author page.

As you can see it has been a busy year so far, but an exciting one as well. I am really looking forward to what the remaining months of 2017 will bring and what lies ahead in 2018. Stay tuned!